At a time when racism is in the headlines, why the media silence on ‘disturbing instances of racism against Jews’?

It’s been horrible to see images from Israel of school girls – some as young as 8 - spat at and cursed as “sluts” by Ultra-Orthodox Jews, all grown men, for showing a millimetre or two of flesh. These young girls are themselves Orthodox Jews, and reasonably observant. But clearly not observant enough for these religious extremists, who would also want Jewish women like me to sit separate from men on a bus.

They remain in a minority, although their presence and influence is growing in Israel. And as Israel is still the one democracy in today’s Middle East, many Israeli NGOs and human rights groups are honest enough to monitor the fact.

The international media, never reluctant to report Israel’s failings – both real and imagined - has not been slow to pick up and run with the story.

Fair enough. What baffles me, however, is why the worldwide media is much more reluctant to report many disturbing instances of racism against Jews, often the sentiments of Palestinian leaders and institutions. Because what is said about Jews – in Gaza and the West Bank – on TV channels, in newspapers, even in schools, I find deeply upsetting.

Let me give you some recent examples. I have just been looking at some grotesque caricatures of Jews in the official newspaper of the Palestinian Authority. The same newspaper in which I read not so long ago that “the Jewish religion is false, distorted and corrupted,” and that “Jews are inherently evil” and “plan to take over the world.”

Then there’s the Professor of History on Palestinian TV who referred to “the Jewish disease inflicted on the Palestinian people”?

Or this in a PA-funded educational magazine for children, in which a teenager has a dream about Hitler: “You’re the one who killed the Jews?” she says to him. “Yes,” Hitler replies, “I killed them so you would all know that they are a nation which spreads destruction all over the world.”

Then the Mufti of the Palestinian Authority – its most senior religious leader – has got away with saying that Jews are “the enemies of Allah, who have deviated from their humanity.”

What worse kind of demonisation of an entire people can there be?

And, in fact, comparing us to Apes and Pigs is quite common. This from Al-Aqsa TV – a station run by Hamas: “The descendants of pigs and apes defile Jerusalem.”

If it’s going to headline the excesses of a minority of Ultra-Orthdox Jews – and I think it should – it should also end its deafening silence about the public, mainstream displays of overt racism in the West Bank and Gaza... 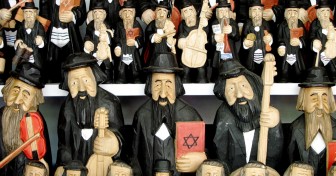 A-Z of Things Unseen: T is for Touch

The Nation State: how ethical is it?