Awe can overtake people in very different contexts – when looking at a stark mountain range, or hearing a story of great courage or pain. And then there is the awe which some will sense in the presence of what is called, in Hebrew, “the voice of fine silence” of God.

In the first in our A-Z of Things Unseen, Rabbi Jonathan Wittenberg from the New North London Synagogue reflects on why awe has become more and more important to him over the years. And he argues that it is a feeling and attitude which not confined to people of faith – even some atheists, sometimes in spite of themselves, resort to the language of the sacred when describing a sense of awe.

The A-Z of Things Unseen takes a look at an eclectic mix of ideas and concepts through the eyes of 26 people of different faiths, as well as some who have no faith. Some speakers have chosen a concept with recognizably religious or spiritual overtones, others have picked things which at first sight have nothing to do with faith – from creativity to touch. 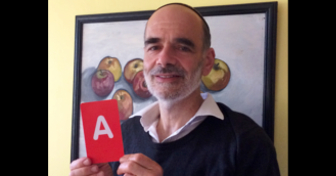