So why no debate on the assumptions behind the more apocalyptic forecasts?

Example: the UN forecast 50 million climate refugees by 2010 – where are they?

[Image courtesy of 1_sparky via Flickr.com ©©]

The latest so-called Climate Summit, that’s been taking place in Durban, hasn’t made many waves. It could be because global warming seems less daunting if you can no longer afford heating bills. It could also be that we’re getting fed up with the bogus certainties and quasi-religious tone of the great climate change non-debate.

Now, I don’t know for certain that man’s activities are causing the planet to heat up. Nobody does. We simply cannot construct a theoretical model that can cope with all the variables.

For what it’s worth, I think anthropogenic warming is taking place, and, anyway, it would be a good thing to stop chucking so much bad stuff into the atmosphere.

What gets up my nose is being infantilized by governments, by the BBC, by the Guardian that there is no argument, that all scientists who aren’t cranks and charlatans are agreed on all this, that the consequences are uniformly negative, the issues beyond doubt and the steps to be taken beyond dispute.

You’re not necessarily a crank to point out that global temperatures change a great deal anyway. A thousand years ago we had a Mediterranean climate in this country; 200 years ago we were skating every winter on the Thames.

And actually there has been no significant rise in global temperatures for more than a decade now.

Droughts aren’t increasing. There are fewer of them, and less severe, than a hundred years ago. The number of hurricanes hasn’t changed, the number of cyclones and typhoons has actually fallen over the last 30 years.

There may be answers, I think there probably are - to all these quibbles – I would like to hear them.

I don’t want the media to make up my mind up for me.

I don’t need to be told things by officialdom in all its forms, that are not true, or not the whole truth, for my own good.

I resent the implication that the exercise of my reason is “inappropriate”, an act of generational selfishness, a heresy.

I want a genuine debate about the assumptions behind the more apocalyptic forecasts.

That was last year.

I would like to hear a clash of informed opinion about what would actually be better if it got warmer as well as worse.

Where do you see reported the extraordinary greening of the Sahel, and shrinking of the Sahara that’s been going on for 30 years now – the regeneration of vegetation across a huge, formerly arid swathe of dirt poor Africa. More warming means more rainfall. More CO2 means plants grow bigger, stronger, faster.

I would like a real argument over climate change policy, if only to rid myself of the nagging feeling that sometimes it’s a really good excuse for banging up taxes and public-sector job creation.

It’s not happening. It’s a secular issue but skepticism is heresy.

They talk the language of science, but it is really a post-God religion that rejects relativist materialism.

Its imperative is moral.

It looks to a society where some choices are obviously, and universally held to be, better than others.

A life where having what we want is not a right and nature puts constraints on the free play of desires.

To reinvent, in short, a life where there is good and bad, right and wrong.

As with all religions, whether the underlying narrative is true, has become beside the point. 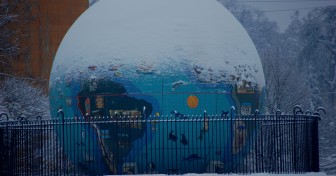