For two weeks in October, members of the Extinction Rebellion movement are attempting to disrupt life in London and other cities in the UK and elsewhere to draw attention to what they say is an impending climate catastrophe.

Among them are Christians of all ages who are camping out in the rain and risking arrest to make their point: that it’s their God-given responsibility to take care of the earth, and that only immediate and radical measures to achieve zero carbon emissions will do the job.

In this podcast, Rosie Dawson joins the Christian protestors to hear what drives them and how they answer their critics.

Among those she meets is the Rev Jo Rand, a Methodist minister from Cumbria who was arrested and physically carried off Lambeth Bridge by four policemen – but, she says, she felt she was where God was calling her to be. 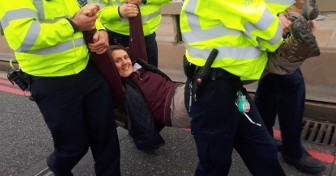