Chine McDonald (nee Mbubaegbu) is a Black Briton from a Nigerian background. She is also recently married – to a white Yorkshireman. An example, she says, of how unity can come out of diversity, not by trying to make everyone the same, but standing together and creating something new out of what everyone brings.

A writer and director of communications for the UK’s leading evangelical Christian body, the Evangelical Alliance, Chine believes that religion can often be blamed for disunity among people of faith – because religions are made up of people, and division is part of human nature.

One beautiful act of unity, she says, is found in the Biblical story of Ruth: after her husband’s death Ruth refuses to leave her mother-in-law, Naomi, on her own.

The A-Z of Things Unseen features a different speaker of faith (and some doubters, too) for each letter of the alphabet, making for an eclectic mix of thought-provoking concepts and ideas. 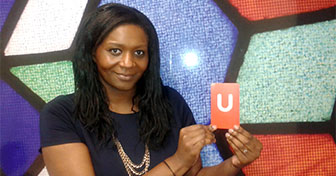