Growing up, Nicky Gumbel found religion pointless and dull and considered Christianity “intellectually unsustainable”. Yet today he is best known as vicar of one the largest evangelical churches in the country and the modern-day architect of the popular Alpha Course, designed to help people explore the basics of the Christian faith. Some have even called him the Church of England’s “spiritual father”.

But there are dark places in his biography too – first and foremost the fate of many of his German Jewish father’s relatives, who were killed in the Holocaust.

Speaking to Louisa Foxe, Nicky Gumbel discusses the Bible passages that led to his conversion to Christianity, his decision to give up his barrister wig to become a man of the cloth, and how his father’s death has brought him closer to his Jewish roots. 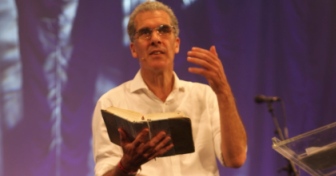