Jason Smyth was born in Northern Ireland into a Mormon family. At the age of 8, he was diagnosed with Stargardt’s disease, which robbed him of his central vision, leaving him legally blind. Yet he has never let this stop him: in the Paralympic Games in Beijing and London, he won two gold medals each time. He is also a double IPC Athletics world champion and has competed successfully in mainstream athletics events.

In this edition of our A-Z, Jason reflects on how the faith he was brought up in enables him to be the best he can be, and inspires him to help others achieve their best too. Before he warms up at this year’s IPC World Championships in Doha this month, he says, he will be spending a few moments in prayer before going for gold once more.

The A-Z of Things Unseen brings together 26 speakers from different faiths (and some serious doubters too) who reflect on an eclectic mix of concepts and ideas with a spiritual dimension. 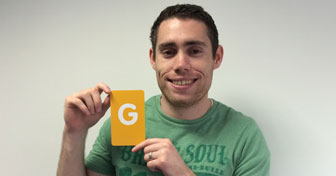