‘My children are 7, 9, 12. They singalong to pop song lyrics like “‘sex in the air, I don’t care’. I don’t want them hearing this stuff; they don’t have the emotional maturity. Can’t the broadcasters give a lead here?’

[Image courtesy of partymonstrrrr via Flickr.com ©©]

I love pop music and so do my kids. And I’m no prude – sexual innuendo in music is fine by me – it’s always been there. But I object to graphic sexual language in mainstream songs. Especially when it means my children aged 7, 9, and 12 only have to listen to the charts to hear and sing along to the latest Lily Allen hit “I know you be getting so horny, cause you be sending me texts” and “she’ll be waiting on me naked with one of my chains on…” Or the Rhianna hit loved by kids everywhere: “Sex in the air, I don't care, I love the smell of it. Sticks and stones may break my bones, but chains and whips excite me”. Now, this feels really wrong, but there doesn’t seem much I can do about it.

I’m not calling for any kind of censorship, just a sense of responsibility. I don’t want my kids hearing this stuff; I want them to stay innocent for as long as possible. Can’t the broadcasters give me a hand here? Instead of bombarding the kids with in-your- face sexual lyrics in the mornings, afternoons, weekends – in the car, in the supermarket, in the café? Given that I’m already trying to police what my kids see on television, on the internet, on mobiles, on music videos, can’t they collectively bring in a “watershed” on the radio so there is at least one place children aren’t exposed to these explicit lyrics?

Kids listen to an average of 2.5 hours of music a day – for many it’s the very air they breathe - and I reckon these lyrics must have some effect on their behaviour. We’ve created a culture that teaches girls their value to the world is in their breasts and butts – glorified as “lady humps” in one particular song my kids love – and leads boys to have unrealistic expectations of women.

Studies have found a strong link between exposure to sexual media in music and early sexual activity. It may be all subconscious but there’s a drip-drip effect. I can see just by looking at some of the social networking sites, that young teens are using songs’ sexual lyrics to describe their 'status' on the site. My 12-year-old daughter, and her friends, are obsessed with the way they look – and they all want to be ‘sexy’. They know far too much too young; and they don’t have the emotional maturity to deal with it.

Ofcom have recently reminded the BBC and commercial radio broadcasters to take extra care when children may be listening. They’ve published guidelines for clarifying the rules in the broadcasting code. But driving the kids home from school today my 7-year- old was singing along to Bruno Mars - “Tomorrow I'll wake up, Meet a really nice girl, have some really nice sex; And she's gonna scream out: 'this is Great!'.

Ofcom’s guidance seems to mean little. What would mean so much more is if broadcasters themselves took the lead – and vowed to play adult material when only adults are likely to be listening. 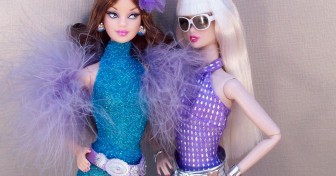