The first thing Shelagh Robinson noticed was that she got lost driving familiar routes, and found it more and more difficult to park her car. She also found her computer and other gadgets harder to operate. About four years ago, the 74-year-old counsellor received a devastating diagnosis: dementia.

But Shelagh remains thoughtful , articulate and upbeat – and she still works as a counsellor. She is also deeply spiritual. A Quaker for the last 25 years, she finds great solace in the silence and simplicity of Quaker meetings and in the good-humoured empathy and understanding she finds in her community.

And, as she tells Remona Aly in this moving interview, she feels as close to God as she ever did – and is confident that her faith will stay with her until the end.

A fuller discussion of what role faith and religious communities can play in supporting people with dementia and their families can be heard here.

If you or a loved one have been affected by any of the issues raised in this programme, you may be interested in the following resources: 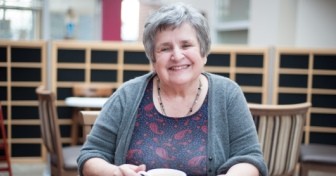