No fewer than 850,000 people in the UK are living with dementia. With the baby boomer generation getting older, the numbers of those receiving this devastating diagnosis are set to rise further.

Yet even when short-term memory or the ability to operate gadgets are badly affected, the memory of what has been meaningful for the patient usually remains intact for a long time. This emotional memory includes the memory of faith.

In this programme, Remona Aly discusses with three guests what role faith can play in the lives of people with dementia and their families, and what churches and other faith communities can do to meet their spiritual needs. She also asks where this leaves people of no faith – do they have spiritual needs as well, and how can carers discover what they are?

Margaret Goodall, a Methodist minister and chaplaincy development manager for the charity MHA, which provides care of older people across Britain;

Akhlak Rauf, who works for the social services initiative Meri Yaadain (“My Memory”) in Bradford and takes a particular interest in the needs of Muslims, Hindus and Sikhs with dementia and their families; and

Peter Kevern, Associate Professor in Values of Care at Staffordshire University, who began to take a particular interest in dementia after his own mother developed the disease.

Remona also talks to 74-year-old Shelagh Robinson, a Quaker who was diagnosed with Alzheimer’s several years ago and – despite the initial shock – finds deep meaning and solace in her Christian faith. A longer version of the interview with Shelagh will be made available as a bonus track on Things Unseen.
If you or a loved one have been affected by any of the issues raised in this programme, you may want to look at the following resources: 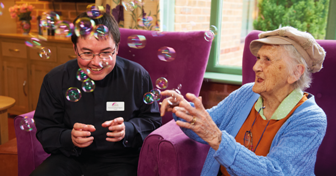