Following a chance remark from a Ukranian flatmate on the stereotypical characteristics of her neighbouring countries (sleazy Lithuanians, tidy Hungarians…), Paul Kerensa decided to investigate the global nature of our tendency to pigeon-hole nationalities.

What he discovered became an Edinburgh show called Borderline Racist. But he also found the same issues cropping up in his other work for ‘Miranda’, ‘Not Going Out’ and ‘Top Gear’.

With stand-up comedians replacing jokes aimed at minorities with ones at the expense of celebrities and nearby towns, he compares tribal attitudes in parts of the Christian Bible, and thinks about victimless comedy.

The A-Z of Things Unseen features an eclectic mix of concepts and ideas (some religious or spiritual, others seemingly secular) tackled by speakers of different faiths. 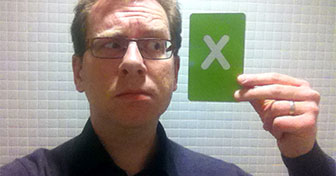