The Angel Gabriel goes rogue in a bid to deal with the over-commercialisation of Christmas. A fresh and irreverent look at the knotty issue of Christmas and shopping.

The cast includes vocal virtuoso Kerry Shale as Santa, comic genius Philip Fox as Gabriel, and star of Radio 4’s ‘Hudson and Pepperdine Show’, Mel Hudson, as the put-upon Lori. ‘I have to confess’, says Lori in a prayer that frames the action, ‘…punching Rudolph in the nose was a low point’.

Script-writer Alastair Collinson joined CTVC a year ago. Despite winning awards for his writing and having had short films produced, he’s predominantly worked on commissioned but as yet un-filmed screenplays, so he is thrilled to hear his work come to life in this new medium of audio. 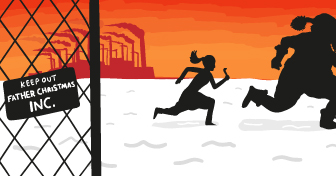