Rani Moorthy grew up in Malaysia, a Hindu immigrant from Sri Lanka and as such very much part of a minority group. So it made her feel even more of an outsider when, as she reached puberty, she was formally dressed in her first sari.

Part of her youthful rebellion was to reject those six yards of cloth – but now, many years later, she has made it the subject of her one-woman play, Whose Sari Now? It is the funny and poignant journey of one sari passed from woman to woman, exploring the stories of migrants in the process.

For Rani herself, it amuses her how the sari can be both a symbol of female decorum for Hindus, and a highly revealing garment. And she has found her own way of re-embracing the sari – even though you may well see her wearing it with doc martens.

The A-Z of Things Unseen features speakers from different faiths (and some doubters, too) each reflecting on a concept or idea of their choice. 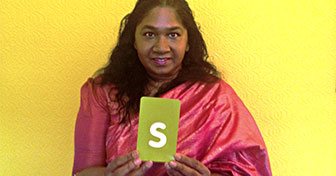 A Loan From God

A-Z of Things Unseen: Y is for Yamuna