The Yamuna is one of the many rivers in India that are sacred to Hindus. On its banks lies the city of Vrindavan, believed to be the birthplace of the Lord Krishna.

Shaunaka Rishi Das from the Oxford Centre for Hindu Studies has visited the Yamuna many times over several decades. In this edition of the A-Z of Things Unseen, he recalls some key moments of spiritual awakening and growth which he experienced on the banks of the sacred river.

Among them is a challenge thrown out by an old man during his first ever bath in the Yamuna with a group of devotees from Ireland. Other seminal experiences include a close encounter with a snake, and the insights Shaunaka gained after he scattered his wife’s ashes in the sacred river: rather than him returning his wife to Krishna, he realized, she had been his all along and only shared her husband’s life “as a loan” from God. With that insight came acceptance of her death.

The A-Z of Things Unseen is an eclectic mix of voices from different faiths (as well as some doubters), each tackling a concept of their choice from a personal perspective. 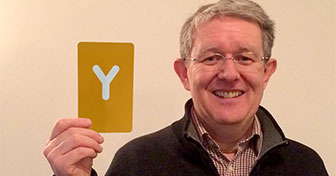 A Loan From God

A Long Walk Towards Wellness