What does your role on Things Unseen involve?
I’m the editor, which broadly means I make sure that it all happens and that the podcast does what it’s meant to do: provide intelligent and thoughtful listening for people of faith, and those who just feel that there’s more to life than the material world. But I wouldn’t be able to do it without the expertise and hard work of the team.

How did you get to work on Things Unseen?
I spent over 20 years working for the BBC, much of that time in Religion & Ethics. So when in 2013, CTVC – a charity specializing in TV and radio programmes on those subjects – wanted a new podcast exploring the spiritual dimension to life, they asked me to do it. The rest is history.

What has been your most difficult assignment?
When you prepare a programme or podcast, there’s very often a phase where things just won’t come together. I once spent three weeks trying to find Christian missionaries who were prepared to talk openly about working in Islamic countries. Extremely difficult because such missionaries work very largely undercover, although in the end some did agree to talk.

What has been the hairiest moment in your programme and podcast-making career?
I had a close escape when I was in Dharamsala in Northern India in 2005 to interview the Dalai Lama. A serious earthquake struck just as I was packing up to leave the hotel, which was hanging off a cliff edge in a very mountainous area – so the entrance was at the top and all other floors built below it. If it had fallen, I wouldn’t be sitting here writing this.

Which has been your favourite edition of Things Unseen and why?
I wouldn’t put out anything I didn’t like, so that’s a difficult one. Some of our interviews with people opening up about difficult spiritual journeys – such as Lesley Bilinda or Kevin Gosden – have been very powerful. But I’ve also enjoyed Tim Winter and Amy-Jill Levine talking about Jesus from the Muslim and Jewish perspectives, respectively. Their insights are real eye-openers.

If you could take just one book to a desert island, what would it be?
I’m originally from Germany, and although English has been my working language for over 20 years, German remains my “language of the heart” in some ways. So it would have to be my big anthology of German poetry.

And one piece of music?
I love Rachmaninov’s Vespers, though I’m not entirely sure whether it would feel the same on a desert island!

Which person – living or dead – do you most admire and why?
Celebrity culture leaves me cold, so it would be someone who has lived a life of being loving and giving away from the limelight. There are many such people; I had a great friend, an elderly Muslim gentleman, who taught me through his example to see the best in everyone. I also admire people who arrive at simple yet profound insights early in life, especially in testing circumstances – such as Anne Frank.

What would your perfect day be?
A sunny day in May out with my husband somewhere beautiful, ending with Compline at a Benedictine monastery. I love the beauty and simplicity of the Benedictine way of prayer.

If you could choose any guest at all for Things Unseen, who would it be and why?
An in-depth interview with Pope Francis would be hard to beat – especially if he was willing to be as open and thoughtful as some of our guests have been on Things Unseen. Meeting him and learning something genuinely new about his inner life, thoughts and plans for the church would be a once-in-a-lifetime experience.

Tell us a secret.
I still support Werder Bremen, the local football team where I grew up in Northern Germany. I even own one of their green-and-white shirts – but I have yet to pluck up the courage to wear it in public! 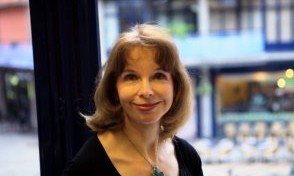