In the early 1990s, Scottish Tearfund health worker Lesley Strachan met and married Rwandan pastor Charles Bilinda. Less than 18 months after the wedding, in April 1994, he vanished in the genocide.

For Lesley, the frantic search for her husband gradually turned into acceptance that he had been killed – one of at least 800,000 people to be butchered in a matter of months. But ten years on, her search for his killers and details of how he had died turned up another very painful truth.

In conversation with Mark Dowd, Lesley Bilinda recalls the anguish of those years and how the pain and betrayal she experienced led her into a deep crisis of faith: why had God not protected Charles during the genocide? What does forgiveness mean if you do not know your husband’s killers –or in a situation of personal betrayal? And where do such questions leave you in a church setting where doubt is frowned upon?

As the story unfolds, we hear how her own pain has led Lesley to a far deeper awareness of Christ’s suffering on the cross – and how 20 years on, precisely because of the depth of her own sorrow, she also experiences times of genuine resurrection joy. 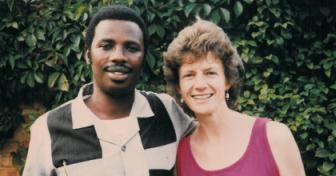 12:02 PM Jan 19th
#Ramadan starts on 2nd April - that's less than 75 days away! Are you doing anything special this year, for others… https://t.co/Ng0AxduXnO

04:00 PM Jan 18th
Are you a #Christian living in the UK? Have you taken part in preparing the body of a loved one for their #funeral… https://t.co/Y6CmN1t3J9

04:38 PM Jan 16th
This is stunningly beautiful. Thank you for posting it. https://t.co/wuPaX1PBYJ

10:27 AM Jan 12th
#Ramadan starts on 2nd April - that's less than three months away! Are you doing anything special this year, for ot… https://t.co/duI51U5dhj

05:54 PM Jan 11th
Our most popular #podcast is about #meaning - is anyone surprised? Human beings are meaning-seeking creatures. Hear… https://t.co/lyiz1ytJUp