Yes, bankers have ‘nationalised their risks while privatising their rewards’ – but the St Pauls’ protestors, ‘spoilt children of capitalism, living lives beyond the dreams of previous generations’, offer only ‘vapid sloganising’.

What would Jesus do? they ask. The only possible answer is: God knows.

The protestors, camped out in the precincts of St Pauls to campaign against capitalism are rather too fond of that glib question: What would Jesus do? The only reasonable answer, given His reluctance to be politically pigeon-holed, is: God knows.

Perhaps they should ask what their new landlord, St Paul, would have done. By glorious coincidence ( I suppose it is a coincidence?) he was a tent maker by trade, and - until his dramatic conversion – a capitalist by practice and inclination. He might well have been out there in the cloisters flogging bell tents while arguing ethics with the unwashed.

He was robust and effective – he invented Christianity, after all – and didn’t suffer fools gladly – so I imagine both the protestors and the clerics who administer the great cathedral in his name, would get short shrift.

The church, in fact, is so far the only casualty of the protest. The dithering, and confusion, at the Cathedral over how to respond to their unwanted guests didn’t look good and seemed to demonstrate a lack of moral leadership at a time of anxiety and crisis. Since then, the church seems to have aligned itself with the demonstrators and their concerns.

But what are they, exactly? To be sure the protest has struck a chord with a general sense of unease about greed and inequality and the question of who bears the consequences of risk. But, inasmuch as the protest presents any analysis of our current problems, let alone alternative solutions, it is incoherent - too often just vapid sloganising.

These are the spoilt children of capitalism, living lives beyond the dreams of previous generations ( and those today locked into other systems) because of capitalism’s success. The taxes alone of the City they hate paid for the equivalent of whole education budget last year.

There is a lot wrong. It’s not just envy to resent the astronomical salaries paid to some bankers who’ve managed to nationalise their risks while privatising their rewards. But they’re not alone. As a society, we’re deep in debt, ever wanting things we can’t afford “because we’re worth it”, valuing the value-less and scoffing at old fashioned ideas like virtue, and duty, and honour.

We live in a time, not just of economic uncertainty, but of moral confusion. A current example. According to my newspaper, the top security hospital, Broadmoor, is considering recruiting a witch, presumably at public expense, to attend to the spiritual needs of those deranged murderers who’ve taken to paganism.

Never mind Broadmoor, the world’s gone mad, and the tents at St Pauls are a symptom, not a cure. 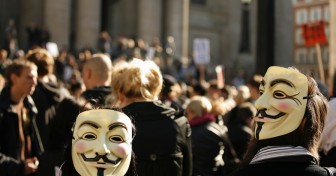