We’re nearly half way through the London Olympics and firmly in the grip of glorious delusions.

We’re deluded to think the ancient games were some sort of heroic contest that spread purity and peace. The athletes were professional, often cheats, the sponsors bribed their way to glory and the Greek city states were perpetually fighting each other.

The Olympics were reinvented by a French baron who, initially at least, hoped sport would make his countrymen, who had just been humiliated in the Franco-Prussian war, better able to fight. He later became an enthusiast for Hitler, as were the other two men who’ve dominated the Olympic movement, the American anti-Semite, Avery Brundage, and Juan Antonio Samaranch, a card-carrying fascist who was one of Franco’s right-hand men. Incidentally, the Olympic torch we have clapped round Britain was first used by Goebbels to glorify the Third Reich.

The Olympic ideal is enshrined in an organizing committee as self-serving and historically corrupt as any in world sport..and, believe me, that is a fierce competition. They demand the Zil lanes and the best seats which they are, apparently, too busy being lushed up to use.

The opening ceremony was a triumph of delusions. It was brilliant, spectacular, and – in every sense- fantastic. Merrie England as a pre-lapsarian idyll was fantasy, the industrial revolution as mere despoliation, rather than the birthplace of modernity, was, let’s say, one-sided, and the glorification of the NHS surely inexplicable to foreigners with demonstrably better health care.

The sport, itself, started with the traditional collapse of Great British Hopes. The football team capped half a century of national non-achievement by failing to beat Senegal, a ramshackle corner of Africa where most people can’t afford a football. The British team’s captain, an elderly Welshman, sportingly refused to sing the national anthem. The British cyclist who couldn’t lose, promptly did with equal ill-grace. The main BBC News devoted nearly all the programme to the Olympics everybody had already seen after we scrambled a bronze. The days when Britain won more medals than every other country put together – and, for that matter, when the BBC understood that news was more than what people were talking about in the pub – are long gone.

The games weren’t under budget. Even the officially acknowledged £9 billion plus is four times the figure we were given when we were sold the idea.

They won’t bring significant economic benefits; no recent games have. The Olympic visitors are far less numerous than the regular tourists we’ve frightened away. Central London’s a ghost town. One and a half million Londoners aren’t coming into work. Big stores say they’ve lost 70% of their business. The Olympic village has already been sold at a reported loss to the taxpayer of £275 million.

The games won’t make us healthier, or more sporty. We’re the most obese nation in Europe and getting worse, thanks in no small measure to the Olympics sponsors, by the way. Academic studies show “mega events” have no net impact at all. We used to be good at running in circles and chucking things. But now state schools have flogged off their playing fields and state teachers can’t stand winners because they don’t want anybody to lose, we’re left with the fringe sports only private schools can afford to play.

But, you know what? It’s time to get off the fence. I am learning to love the games…first the collective experience, standing in warm and wonderful crowds, high fiving the motor cycle cops who’ve been grandstanding shamelessly – never have the filth been so feted.

The opening ceremony was a glorious, and totally accurate, celebration of our national self-delusion. If we can’t be powerful, or successful, we can at least be eccentric and show off.

I even like the sport. Beach volleyball, of course – Health and Efficiency at Horse Guards. Irresistible. But also the highly technical, obsessive stuff, triple inward pikes and so on. I look at those gymnasts and, instead of thinking how sad you have to be spending every waking moment swiveling on a bit of overstuffed furniture, I think: magnificent! Gold medals – at last! Perhaps I need counselling.

The cynic in me is not dead, but on a fortnight’s holiday. Second thoughts: make that a week. 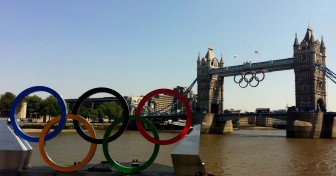 OLYMPICS OVER, CAN THERE BE A LASTING LEGACY?

MICHAEL BUERK ON OUR GOLD MEDALS