The ‘F’ word is ok, just cheery badinage. ‘Black, in what is thought to be the wrong context, induces apoplexy. Another sign, says Buerk, of ‘a vertiginous decline in civility…a growing coarseness in our public (and private) life’.

This week Mr Justice Bean – and, before I really get going, I would like you to notice the heroic restraint, sensitivity and natural good manners with which I sidestep the temptation to make any fun of such an unfortunate name in this context – Mr Justice Bean made a landmark effing judgement.

He ruled that it was not an offence to use the F-word to a police officer. He overturned a conviction and fine imposed on a 20-year-old who repeatedly did so when being searched for drugs. The word is such common currency, the judge decided, that there was no chance the officer could have been distressed by it. Case dismissed.

Leave aside, for one moment, what it means for the rule of law for there to be no sanction against suspects freely insulting the police in whatever foul-mouthed way their imaginations can encompass…

What is going on out there that’s reduced the common currency of our public discourse to a string of obscenities?

How things have changed. The kind of words that –yesterday - would have had even quite
worldly ladies reaching for their smelling salts are –today – just cheery badinage. While, at the same time, mere descriptions like “Black”, “Welsh”, or “Moslem” can, in what’s perceived as the wrong context, leave the world aghast.

Take the still thundering row over what the England football captain, John Terry did or did not say to the Queens Park Rangers Player Anton Ferdinand. Mr Terry is alleged to have called Mr Ferdinand “an effing black- disobliging anatomical reference, “an effing _another disobliging anatomical reference. This is disputed, of course, but the interesting thing is that if – as some of Mr Terry’s supporters maintain- he did say it all but used the word “blind” rather than “black” - no problem….at all..just a bit of innocent, blokish raillery. Instead, the bloggosphere is alight, the President of Fifa totters on his throne, and Mr Terry is half-way to the gallows of public opinion.
Just in case you think this is only happening in the lower, albeit in Mr Terry’s case, richer, echelons of society, you might still be able to catch an 89-year-old Baroness throwing a V-sign the other day across the floor of the House of Lords. Baroness Trumpington, in fact. Once again, innate courtesy prevents me from dwelling on the aptness of her name.

No, this is not a welcome dose of informality, or a new tolerance for free speech and vibrantly edgy debate.

It’s a vertiginous decline in civility: a growing coarseness in our public (and private) life. Manners and morality are a continuum, a slippery slope in this case. And we are becoming less, rather than more tolerant –particularly of those who do not conform to our, increasingly incoherent, values. 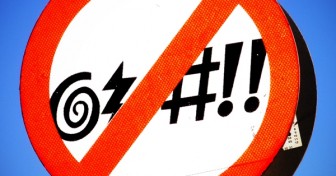 TREVOR BARNES ON WHY INSULTS ARE GOOD FOR US