As the 7 billionth human being is born, one problem, says Michael Buerk, underpins nearly all others in the world, but it’s the one we don’t talk about: ‘There are too many of us’.

On the last day of October, we’re told, a baby girl born somewhere in India became the seven billionth living human on the planet. It’s nonsense, of course. The statistical error in global population estimates is plus or minus 50 million. It might just as easily be a baby boy in Luton or Lapland next February. Or even the son of a Palestinian carpenter hiding from the authorities in Bethlehem on Christmas Day.

Nonetheless it is a significant landmark on the road to demographic disaster; the problem that underpins nearly all the others. You know, the one we don’t talk about.

There are too many of us.

It’s strange that we think it almost immoral not to accept the idea of man-made and detrimental climate change without conclusive evidence - just the balance of scientific probability.

Yet the exponential growth of the human population, a fact we can all see for ourselves, that is already making life uncomfortable and threatens to make it impossible, seems not up for discussion.

The population deniers tend to regard the whole issue as bad taste, a kind of disguised racism. Anyway, they say, it’s not a problem. The global population will level off soon- in half the world it already has- food production will always keep up. As to other resources, the issue is consumption – not numbers. As if there were no connection between the two.

Come with me to the pullulating slums of Dhaka, to Mexico city, where whole towns live on the rubbish dumps, to the Cities of the Dead in Egypt – almost as many people camp in Cairo’s cemeteries as the whole of London.

Fly almost anywhere at night and see the orange glow of our metastasising cities, try to get in from Heathrow in the Monday morning rush hour…and tell me there is no problem. 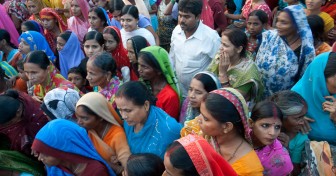