Britain is the fat champion of Europe; the PM is considering a so-called fat tax. But it’s our choice, it’s our business, it’s not the government’s job to tell us how to eat. It’s another example of our ‘nanny knows best’ culture.

[Image courtesy of Tobyotter via Flickr.com ©©]

Britain’s economy may be anorexic but Britons, themselves, are on a steady path to growth, out pacing almost every other country in the world. We are the fat champions of Europe, only outwaddled globally by the Americans and the people of Tonga who fetishise fatness. The latest figures, released this week, show that very nearly one in four women in this country is clinically obese, British men are just a percentage point behind. The majority of adults (61.3%) are defined as overweight, as are more than one in four children.

Our obesity rates are twice as high as France and Italy and forecast to double over the next twenty years. The clamour for “something to be done” is getting louder by the day. We are told we should follow the example of Denmark, which has just imposed a so-called “Fat Tax” on foods considered inimical to health. David Cameron says the government is actively considering it. Oh dear.

Let’s start with a few obvious points. Being fat is a matter of choice. You’re fat because you eat too much. Probably fatty or sweet stuff. And you are too lazy to do exercise. In nearly every case, there is no other explanation than greed….and it has little to do with poverty either. For the first time in history, it is the poor that are fat; healthy food is actually cheaper than convenience snacks. It’s your fault, and you could put it right. Just stop guzzling.

But..it’s your choice, and your business. It is not part of the government’s job to tell you what, when and how to eat. This is the latest example of the “nanny knows best” culture that’s colonising our private lives.

It is primarily a moral argument about personal liberty, even to do things that might not be good for us. The case that your self-indulgence damages me –by making me pay more for the NHS to treat you – doesn’t bear close examination, and the Fat Tax is a self-defeating nonsense.

The Department of Health says obesity costs the NHS £4.2 billion a year – a meaningless figure. For who can calculate how much a fatty would have cost if they were slim; instead of keeling over with a heart attack at 52, living to a ripe, dementia-ridden, old age requiring decades of expensive care? (In any case, VAT on takeaways, confectionery and fizzy drinks more than covers it.)

The Danes are taxing food rich in unsaturated fat.. 25p or so on a pack of butter, 8p on a bag of crisps, 30p on a pizza.

And it is simply wrong. The freedom to make bad choices is what personal autonomy, and indeed democracy, is all about

Let’s positively reframe the argument. The obese die a decade earlier than the rest of us; see it as a selfless sacrifice in the fight against demographic imbalance, overpopulation and climate change.

Give them the facts to make informed decisions by all means, but then – hands off fatties. 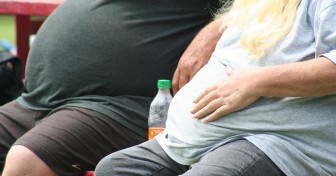 TREVOR BARNES: WHY WE SHOULD BE ON OUR GUARD