‘In Christ Alone’, written by Stuart Townend with Keith Getty, has been sung around the world, from underground churches to the Archbishop of Canterbury’s enthronement. Having lost his father prematurely in an accident, and now supporting his brother who is gravely ill, Stuart feels that part of the reason his songs connect with people is because of his awareness of grief.

The musician’s favourite Bible readings are read for Things Unseen by David Suchet, as Stuart Townend tells Alison Hilliard how some of his most popular songs came about, how he’s dealt with the debate around some of his lyrics, and why attitude is more important than doctrine when it comes to issues like gay marriage.

Stuart’s new song, mentioned in the podcast and inspired by his brother’s illness, can be seen here. 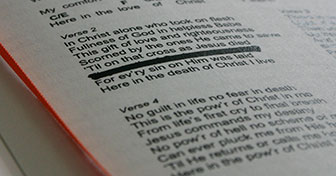