If the Church of England votes in favour of women bishops later this year, Rose Hudson-Wilkin is strongly tipped to be among the first tranche of women appointed. She is no stranger to being a pioneer. In 2007, she became the first black woman to be made one of the Queen’s Chaplains. Three years later, she was chosen to be Chaplain to the Speaker of the House of Commons, again the first black woman – and indeed the first woman – to fill that role. She now balances parliamentary prayers with homilies in Hackney in East London, where she looks after two multi-cultural parishes.

In this interview, Rose Hudson-Wilkin speaks to Louisa Foxe about the Bible passages that have led her to where she is now. Her selections reveal her passion on a breadth of social and political issues, including immigration. Movingly, but with characteristic vigour, she talks about her disappointment over setbacks suffered by the cause for women bishops, and the growth of her own faith: “I discovered… God was interested in my everyday life”.

The Bible readings are by David Suchet. 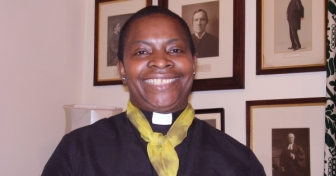