Google “Lord Smith of Finsbury” and you’ll find out that in 1984 he made history as an “inadvertent trailblazer” when he became the first MP to reveal he was gay; that he went on to become secretary of state for culture, media and sport under Tony Blair; that in 2005 he revealed that nearly two decades earlier he had been diagnosed with HIV; that after a political career spanning twenty-two years he was made a life peer and that he currently oversees the Environment Agency and the Advertising Standards Authority.

You may be hard-pressed to find substantial references to his faith – but his Christian beliefs have been an integral part of his life: “There are always moments when you think, why is this happening to me…? In those moments what I find most powerful is the image of a suffering God.”

Intertwining Biblical passages with quotes from poets and biographers, Lord Smith speaks to Louisa Foxe in this revelatory interview about the verses that have influenced his professional and personal life, including some stark choices which have often been used to condemn homosexuals. 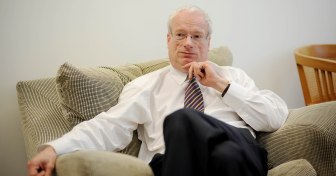