It would not be a cliché to say that Leslie Griffiths, one of Britain’s most senior Methodist ministers, came from the wrong side of the tracks. Born in 1942, Leslie was brought up in an impoverished district of Burry Port in Wales, which was separated from the more affluent neighbourhoods by a Brunel railway.

Despite his experience of childhood poverty, which saw him begging for food and earned him a reputation as a local troublemaker, Leslie managed to win a place at his local grammar school, going on to forge a successful academic career. After his ordination, he rose to head the Methodist Conference – a body that steers seventy million Methodists worldwide. Not bad for someone who describes himself as “an accidental Methodist”.

In conversation with Alison Hilliard, Lord Griffiths speaks about the Bible verses that changed his life and led him to ordained ministry, saying that he “knew that being a free agent isn’t what life’s all about, you have to choose your path”. He also reveals how doing missionary work among some of the world’s poorest people in Haiti reconnected him to the self he thought he had left behind – the boy from Burry Port. 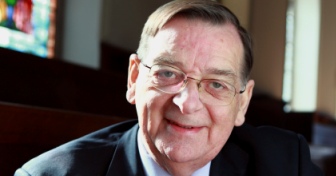