The story of Moses has inspired more than one Hollywood epic. Most recently, director Scott Ridley brought him back to the big screen in Exodus: Gods and Kings. Although the film had mixed reviews, it is clear that Moses remains a compelling figure, with a powerful story.

Even those with scant religious knowledge will remember Moses as the man who led the Children of Israel out of Egypt and bondage. It is much less known that Moses is also one of the Five Great Prophets of the Islamic tradition.

In this podcast, Abdul-Azim Ahmed explores the person of the Muslim Moses – known in Arabic as Musa – and whether in this day and age, he can be a uniting figure between Muslims and Jews.

The Muslim Moses was the winner of our first Things Unseen podcast competition in 2015. Although technically not perfect, the judges felt this entry stood out through its purposeful examination of a clearly defined subject, and the inclusion of both Muslim and Jewish contributors.

“At a time when points of strife between Muslims and Jews are all too often prominent in the media”, they said, “it was good to hear about a subject which unites the two faiths.”

Abdul-Azim Ahmed is 26 years old and a student from Cardiff. 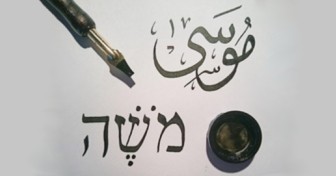