Jim al-Khalili is the son of an Iraqi Muslim father and an English Christian mother who, by his own admission, does not have “a religious bone in his body”. He is also the outgoing President of the British Humanist Association, a science writer and broadcaster and Professor of Theoretical Physics at the University of Surrey.

In this edition of Things Unseen, Abdul-Azim Ahmed – editor of On Religion magazine and winner of our 2015 podcast competition – talks to Jim about how his mixed-faith background has shaped his outlook on religion and atheism, and where he feels faith communities and Humanists need to head in the future.

We hear how a personal disappointment as a teenager did much to persuade Jim that religion was not for him. Yet his atheism has never taken the form of either attacking or despising people of faith. His critics have accused him of being an accommodationist; his admirers describe him as a faith-friendly atheist, but – he says – he has no time for any aspects of faith that perpetuate inequalities or promote violence.

In an interview studded with anecdotes, we hear why Jim al-Khalili values Richard Dawkins as a “bad cop” and a genuinely charming human being, and where he thinks both faith communities and the Humanist movement need to head in the future. 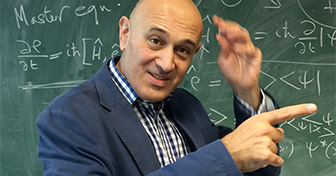