Sikhs made up a tiny percentage of undivided India. Yet at the start of World War I, they contributed some 22 percent of the British Indian Army. Sikhs fought in all major theatres contested by British forces, from the Western Front to the Middle East.

With a great martial tradition embedded in their faith, it was not uncommon to see Sikhs carrying their holy book, the Guru Granth Sahib, before a marching battalion.

In this programme, Nelufar Hedayat hears some of the stories of those Sikh soldiers. She asks why so many of them would have fought a war which was essentially not their own, and what their legacy means to young Sikhs today.

Her guests include:
Amandeep Singh Madra, who chairs the United Kingdom Punjab Heritage Association and has spent several years researching the stories of Sikh soldiers for Empire, Faith and War: The Sikhs and World War One, a major exhibition at the Brunei Gallery at the School of Oriental and African Studies in London running from 9th July to 28th September 2014;

Satdeep Grewal, an artist whose great-great-grandfather fought in the First World War;

Runjeet Singh, a dealer in antique Indian arms whose maternal great-grandfather was killed in France in 1914; and

Sukhraj Singh, who takes a critical view of the Sikh participation in World War I because in his opinion, it lacked a clear moral aim – unlike World War II. 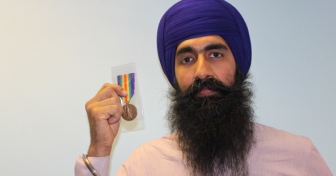 A-Z of Things Unseen: K is for Khalsa Aid

A-Z of Things Unseen: H is for History

A-Z of Things Unseen: D is for Doubt

10:44 AM Aug 3rd
How can you comfort the family of someone dying of #Covid_19 when so much of what you normally do is banned?… https://t.co/mYrCbPbhO0

01:23 PM Jul 30th
How do you offer spiritual support to hospital patients, staff and relatives, at a time of great need, with so many… https://t.co/MLj8BZMdd4

04:55 PM Jul 29th
Coming soon on Things Unseen: on the #Covid wards with #Muslim chaplain Rehanah Sadiq, and how she takes care of th… https://t.co/yp2bWnLGBG

09:03 AM Jul 13th
Relive the moment: producer-director @paulfarnold receives his Gold award on the doorstep on #BritPodAwards night o… https://t.co/ArQLd9jit5