Would you forgive the person responsible for the killing of your child? And would you ask for forgiveness on behalf of your race?

For decades, South Africa was dominated by the struggle against apartheid. The system enforced a rigid racial hierarchy privileging white people over all others, and a strict separation of whites and blacks. State violence and repression led to black freedom fighters taking up arms against the regime.

Following the release of Nelson Mandela from prison in the early 1990s, the country looked forward to its first multi-racial elections with hope and optimism. But a breached ceasefire by the South African Defence Force led to a series of revenge attacks by the black liberation movement, the Azanian People’s Liberation Army (APLA), the armed wing of the Pan Africanist Congress.

It was in such a revenge attack that Lyndi Fourie, a 23-year-old white student, was killed in 1993. In this programme, Mark Dowd meets her mother Ginn Fourie and Letlapa Mphahlele, the military commander of APLA, who ordered the attack. Together they share their extraordinary story, reflecting on how the killing and the injustices of apartheid ultimately set them on a journey towards forgiveness and reconciliation.

And they explain why – even though Letlapa is an atheist and Ginn only has very loose ties with the Christian faith – the concept of forgiveness has become so important to them both.

More information about Ginn and Letlapa’s work can be found via the Lyndi Fourie Foundation website by clicking here. 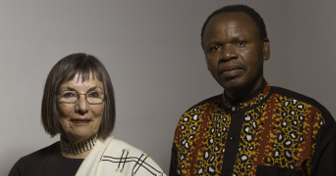