A graduate from the London’s Brit school of Performing Arts, Harris J shot to fame in 2015, after winning a talent contest. With grandparents from India, Ireland, Poland and Jamaica, his debut album seeks to draw on musical influences as varied as his family heritage. Dubbed the Muslim Justin Bieber, with 100 million YouTube hits, and over half a million followers on Instagram, he’s taken the global Islamic music scene by storm.

Here he talks to Things Unseen’s Remona Aly about his music, his faith and how chewing gum is his Achilles heel when it comes to fasting. And he shares his newly released single, Save Me From Myself – and tells us why it’s perfect for Ramadan. 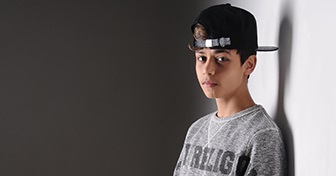 08:27 AM Sep 15th
Call for South Asian bone marrow donor: four-year-old with leukaemia only has weeks to live if a donor can't be fou… https://t.co/W8nNjTOUsQ

09:25 AM Sep 6th
Wishing all our Jewish friends, followers and listeners a very sweet and blessed New Year. #RoshHashanah2021… https://t.co/msv3Lp3JAo