The war in Ukraine has already cost many hundreds of civilian lives and displaced millions of people. It has also exposed a deep rift in the Eastern Orthodox churches.

Russia’s President Putin has portrayed the invasion as an attempt to save Ukraine from sinful Western influences and restore “Holy Rus”, a spiritual entity which includes Russia, Belarus and Ukraine and dates back to the conversion of this part of the world to Christianity more than a thousand years ago.

Patriarch Kirill, Head of the Russian Orthodox Church, has described this idea as “God’s truth” – clearly endorsing the invasion of Ukraine, despite all the bloodshed.

Russia’s war against its neighbour has also caused a deep rift in the Orthodox family of churches. Several have turned away from the Moscow Patriarchate. Even in Russia itself, hundreds of priests have signed an open letter against the invasion.

In this edition of Things Unseen, the writer and broadcaster Lucy Ash sheds some light on the religious underpinnings of this devastating war.

Her guests are Father Cyril Hovorun, an Orthodox priest with roots in both Russia and Ukraine and an academic at the Stockholm School of Theology; and Lord Richard Harries, former Bishop of Oxford and a lover of the strength and beauty of Orthodox spirituality. 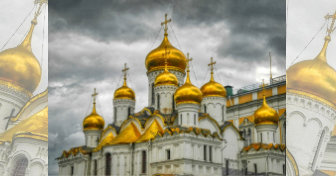