The Easter story is perhaps the ultimate rollercoaster narrative. From triumph to despair and back to triumph again. And it has its fair share of heroes and villains, praised or condemned down the ages. But what about the behind-the-scenes Easter? Un-recorded parts of the tale could make us think again.

Moving between the present day and the 1st century, Patient 13 fills in the gaps of the Gospels in an intriguing look at the events of Holy Week, when Jesus, hailed as the ‘Christ’, was cheered into Jerusalem, executed by the Romans, and then apparently came back to life. A compelling seasonal listen for those familiar with the story, and those coming to it fresh.

Brian Vernel plays the title role – a young actor already making his mark in films such as Dunkirk and Star Wars: The Force Awakens. The play’s author, Bob Ayres, is a BAFTA-winning producer and writer. Having picked up multiple awards for his video productions, this is his debut radio play. Director Paul Arnold has also seen plenty of awards success, most recently Gold at the British Podcast Awards for Things Unseen’s Easter 2019 drama, Entombed. 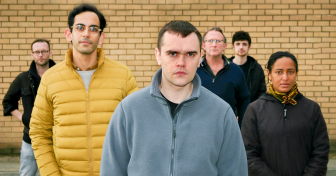