He rarely talks about his spiritual beliefs, and much prefers to spend time with his Creator (whom he calls “Grandfather”) alone in the Arizona desert. Yet in this rare interview, CJ Whitedeer, Cherokee medicine man and the tribe’s only White Priest, has welcomed Jane Little to his “homecoming circle” in Arizona, providing extraordinary insights into some of the stories, beliefs and practices that are part of Native American spirituality.

We hear about the astonishing Cherokee creation story, which holds that the tribe came to Earth from the Pleiades; how they revere a figure who in many ways strongly resembles Jesus; and how CJ himself sometimes sees the world through the eyes of a deer, even though he stops short of what he says he has also witnessed: the full transformation of a man into a wolf.

CJ Whitedeer also tells Jane why his feelings about Christ are much more positive than those about Christianity at large; and how he feels about the many non-Native Americans and Europeans who flock to Arizona to seek his help. 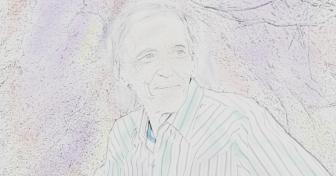