Alison Hilliard brings news of a creative challenge for Good Friday and Easter.

‘ That’s a bite sized haiku poem written specially for Things Unseen by the poet Stewart Henderson. Stewart was inspired by the season of Lent that’s just begun, the 40 days before Easter in the Christian calendar.

I love haikus, these simple three line poems. They each follow a strict format. Line 1 has 5 syllables. Line 2 has 7, and line 3 has 5 syllables again.

Here’s another one for Lent from Stewart, who says about it:

It seems a striking contradiction to suggest that if we forego our  appetite for edible and material comforts, we end up ‘being fed’ somehow. And that if deprived for a fixed period the body and, especially the spirit are then strangely satisfied. This is my thinking and the inspiration behind this, at first reading, contrary haiku.

Here is the paradox
Abstinence somehow sustains
The ravenous soul

‘Haikus like that one have been around since the 9th century in Japan – making us think: they’re like tiny windows into something much larger, often about nature and the seasons. They can be poems or prayers that help us capture a feeling or an image in just a few words.

And we have a challenge for you. We’re asking you to look ahead to the end of Lent – Good Friday and Easter, marking the death on the cross and the resurrection of Jesus. Can you share with us something of  your thoughts or feelings about that season?

Like Stewart, we’d like you to do that that through a three line Haiku poem – with it’s 5, 7 and 5 syllables. And the lines don’t even have to rhyme.

We’ll be including the best haikus in a special Good Friday edition of Things Unseen. So please send us your poems or prayers – along with a bit about yourself and what’s inspired your haiku.

Your Haiku need to be with us by Sunday February 28th. Until then here’s another one from Stewart to inspire you and get you writing.’

Unreachable God
Yet near and far, make me wild
And tender for you 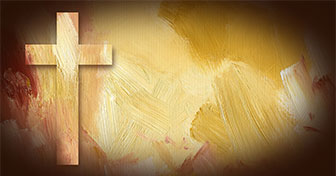