Faraz Yousafzai is the lead singer and guitarist of the folk-rock band, SilkRoad. For our A-Z, he gives free rein to his poetic side to draw out connections between physical vibrations (such as those of the heart and cells in the body) and the way human beings respond to certain musical chords.

One concert he gave at St Ethelburga’s Centre for Reconciliation and Peace in London holds special resonance for him. A young woman walked up to the piano to play, and he accompanied her – improvising, he says, more beautifully than ever before or since. The perfect harmony they created was extended into real life when she became his wife – a development, he says, which felt very much God-given.

Faraz ends with a quote from US poet Mark Gonzales which encapsulates his own philosophy perfectly: in times of terror, is says, all we can do is wage beauty.

For the A-Z of Things Unseen, each speaker tackles a subject of his or her own choice from a personal faith perspective – or in some cases, a perspective of doubt. 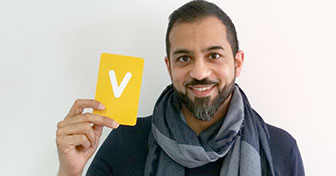