In this edition of our A to Z, the ‘Mail on Sunday’ columnist Peter Hitchens visits Trafalgar Square to get a perspective on a key time in the UK’s history. But he is not looking at Nelson. Instead he turns his attention to the equestrian statue of King Charles I, which faces down Whitehall towards the scene of his execution in 1649.

Charles’ reign was one during which questions of religious doctrine were brought into sharp focus, in particular the place of an individual’s personal relationship with God. This was all against the backdrop of the wider European Protestant Reformation, and was violently manifested in the English Civil War.

Peter argues that we need to understand the origins of the UK’s national life. And whilst we need to learn to conduct our disputes in a more civilised way, he also has some sympathies for a society which riots over prayer books rather than football.

The A-Z of Things Unseen explores an eclectic mix of concepts through the eyes of 26 believers from a range of different faiths – as well as some doubters. 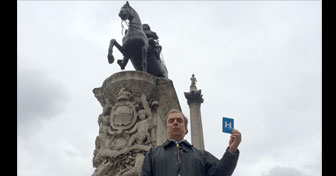