We are delighted that A Mother’s Good Friday: Diane Foley, our podcast featuring the mother of US journalist James Foley, who was murdered by ISIS in 2014, has won the Sandford St Martin Trust’s inaugural Interview of the Year award.

Our 2015 Good Friday edition brought the passion story right into the 21st century, with a present-day mother who has had to endure the knowledge that her son was in danger of execution, and then had to learn to live with his very public and brutal killing.

Talking to Mark Dowd, Diane Foley reflects on why, even though she never spoke to Jim again after his capture, she knew her son was close to her in prayer. She explains how the experience has helped her understand Mary far more deeply, and why she has been able to forgive “Jihadi John”, her son’s unrepentant killer.

The judges, chaired by broadcaster Sue MacGregor, praised the interview for packing “an emotional punch” and said: “We appreciated the way the interviewer guided her sensitively through this distressing story, asking probing and relevant questions about how it had affected her faith.   He was a sensitive and well briefed match for his interviewee, and the music had a strong emotional pull which felt entirely appropriate for the message.” The Sandford St Martin Trust called the podcast “a superb example of what makes a good interview: measured but still deeply personal and moving.”

Maria Foley, the niece of Diane, came to the awards ceremony and is pictured below, next to Things Unseen’s editor, Kristine Pommert, who says, “As a programme maker, you meet and interview hundreds of outstanding people over the years, yet Diane’s courage, composure and strength of faith put her in a league of her own. Mark and I are immensely grateful that she was willing to share and reflect on some of her memories for the Things Unseen audience.”

The Sandford St Martin awards are regarded as the UK’s most prestigious broadcast awards for radio, TV and online content that explores religious, spiritual or ethical themes.

You can still listen to the full podcast here. 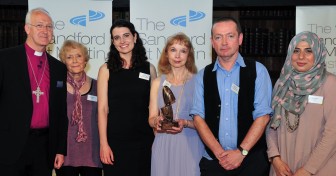