Mary Johnson-Roy’s only child was murdered in 1993. Today, she is helping his killer rebuild his life.

20-year-old Laramiun Byrd was murdered by 16-year-old Oshea Israel, who received a 25-year sentence. Many years later Mary visited Oshea in prison, and after his release in 2010 they lived as next–door-neighbours in the Northside community of Minneapolis – and developed a strong bond. Mary, driven by her Christian faith, now runs From Death to Life, an organization she founded to promote healing between families of victims and perpetrators.

Mike Wooldridge hears from Mary, who says Oshea is her ‘spiritual son’, from Oshea who explains how transformative the initial meeting with Mary was, and from the mothers of murderers and victims of murder as they come together to share their pain.

This is the first of a pair of programmes made by the Things Unseen team featuring people who have had to make tough choices in order to do what they felt was the right thing. In each story, faith plays a key part, whether providing a motivation to choose a particular path, intervening as an unexpected influence, or as a cultural backdrop to difficult decisions. You can listen to it via the BBC website. 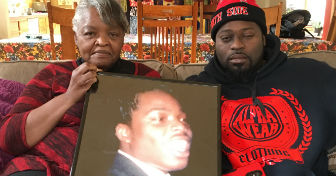