Religious broadcasting is not known as a road to fame and fortune. Many of us beaver away year after year, away from the limelight, sometimes viewed disparagingly by journalist colleagues from areas like news or sport. We have chosen our jobs not because we cannot find anything better, but because we find the subject matter endlessly fascinating – and the people of faith who cross our path in our daily work far more interesting than off-the-peg celebrities.

But let’s admit it: it’s nice to be rewarded sometimes. So we were unashamedly happy when in October, we came away from a glittering award ceremony at Bafta with not one, but two Jerusalem Awards.

The first, in the Digital Audio category, was for our programme on Depression and Faith, which the judges praised as “relevant, wonderful and brave”.

The second, in the Good Friday Digital category, went to A Mother’s Good Friday: Diane Foley, which was honoured for being “a fantastic exposition of faith and suffering”. Both editions were presented by Mark Dowd, one of my all-time favourite “partners in crime”.

I was involved in making both of the winning editions in one capacity or another, and each of them illustrates exactly what I was saying above. What a privilege to get to know a woman like Marie Lewis, the mental nurse who appeared in our programme on depression. She described her experience of the “black dog” to me in the starkest terms: “I felt alone. I knew in my head I wasn’t abandoned by God and that He was there somewhere, but I couldn’t feel His presence. I stopped ‘praying’ and started to talk to God. Anger, tears, anguish, He got the lot.”

And who could even begin to grasp the agony experienced by Diane, the mother of US journalist James Foley, who was brutally killed by “Jihadi John” in 2014? Yet when we spoke to her down the line from the US, she never once lost her composure. This exceptional woman is clearly upheld by an enormously strong, deeply embedded Catholic faith – and yet, she told us, she was unfazed by reports that her son had converted to Islam while in captivity: “All I do know for sure is that he was very close to God. Because Jim had a tremendous amount of courage and compassion to all the other hostages, and that could only have happened if he had been close to God. Only God knows where his heart was at the end.”

After such conversations, and countless others in the course of a year, I feel truly enriched – and often humbled by the courage and spiritual depth I meet in those we interview. So in that sense, the work itself is its best reward.

But needless to say, stepping out onto the stage to receive those Jerusalem Awards is a very special moment in any programme maker’s career.

The picture shows Mark and Kristine receiving one of the awards, with Bridget Cass from the Jerusalem Trust. With thanks for the image to Antony Medley. 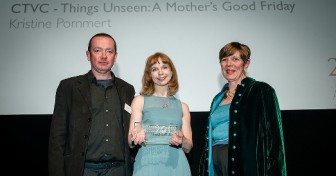